Some folks have been trying to compute the cepstrum in real time on the Tympan. Cool! They’ve been having trouble. That’s less cool. Sorry!

As a bit of background, the cepstrum is taking the FFT of an FFT. See here and here. Common uses:

Doing FFTs in a real-time can be difficult to set up exactly right. So, you can imagine that setting up an FFT of an FFT is even harder to get right. To help people get started, I just added a cepstrum example to the Tympan Library.

If you do try the example, it is set up by default to print the spectrum and cepstrum to via the USB serial link back to the PC. You are welcome to watch the values roll by on the SerialMonitor, but it may be more fun to watch then in the Arduino SerialPlotter!

Once the code has compiled and is running on the Tympan, can open the SerialPlotter via the “Tools” menu in the Arduino IDE.

Once the plotter is open, sing into your Tympan. Here is me singing “AAAAAHHHHH” for several seconds…

The SerialPlotter isn’t pretty and it isn’t flexible, but it is better than nothing. Notice that you see a few copies of the data. The red line is the spectrum and the green line is the cepstrum at the corresponding frequencies. (Be aware that the values are in dB but that the baseline is arbitrary…so don’t think that it represents SPL or anything like that.)

*** Update: I tried to improve the usefulness of the sketch’s interaction with the Arduino SerialPlotter. Now, it looks like this: 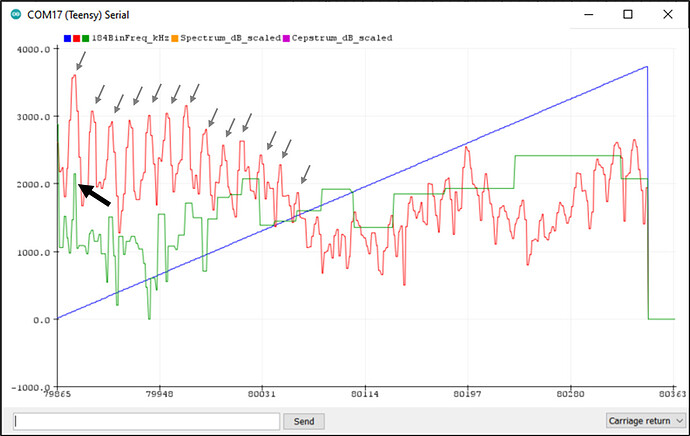 As before, the labels on the x-axis are arbitrary (it’s whatever the SerialPlotter chooses to put there). Instead, x-axis is supposed to be frequency. The frequency values are shown by the blue line…spanning 0 Hz up to just about 4 kHz. The red line is the spectrum and the green line is the cepstrum. The sketch computes them as dB, but then I shift and scale the values to fit this plot. So, really, this real-time plot is useful for seeing how the spectrum relates to the cepstrum. This is me singing “AAAHHH”. The red spectrum clearly shows the harmonics. The green cepstrum has correctly picked out the fundamental frequency. Cool.